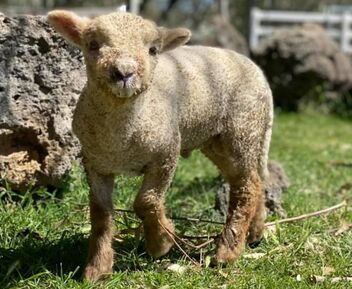 When I first spoke to Mando’s previous guardian, Kim, she had been bottle feeding a tiny lamb day and night for six weeks. She needed help. It was clear from birth that Mando had a jaw deformity commonly known as ‘parrot mouth’. He was also born with a severe cleft palate. His mother rejected him so Kim bottle fed him every few hours. It was evident that Mando would require more support and she sought sanctuary. After we spoke to several trusted vets and a surgeon, it was clear that Mando’s road ahead would be difficult. It was expected that Mando had other underlying health issues, which we would later test for. Despite this, we agreed to provide him a home at the CAPE Animal Sanctuary in March of 2021.

In the past six months, Mando bonded deeply with an old 400 pound pig who he would often snuggle up to. He ran through the pastures and found warm sunny spots to nap in. He got daily nebulizer treatments and medications to help with his breathing, and formed a very sweet relationship with me, his main caregiver. When Mando showed no interest in pellets or hay, we ground them up and put them in the bottle, slowly weaning him off formula. Sheep should only have formula for a brief period of their infancy before ultimately needing to graze in order to develop parts of their digestive system called the rumen and reticulum. Mando never showed interest in grazing, so we set up a bottle feeder where he could eat independently.

Mando lived happily in an outdoor area with Charlie (pig), Labelle and Maggie (Mother and baby goats). He would spend afternoons following me around the sanctuary, running if I got too far ahead. Every week, I would give him baths to clean up his wool, dry him with soft towels and brush him out. I would trim his hooves, rub ointment on his skin, clean under his tail, and give him an overall wellness check. We called it Mando’s “Spa Day”. He would love to be held after his spa treatments and rest his sweet head (with constant goo from his cleft palate) on my shoulder. He beat two bouts of pneumonia, one of the common and serious issues for animals born with cleft palates due to aspiration into the lungs. With medication and special care, he bounced back.

But for the past several weeks, we watched Mando take a dip. Our vets were seeing him regularly and beyond the unknown underlying health issues, they recognized that Mando was stunted in many ways. His body and maturity never aged. Reconstructive surgery was out of the question due to his fragility. We did every single thing we could to help Mando recover, but he showed us in no uncertain terms that he was ready to go. We said goodbye to Mando on Sunday, August 29th, and buried him under peaceful oak trees next to Rootie’s favorite lounge spot.

We want to thank everyone who donated to help with Mando’s care. A very special shoutout to Kim for giving this boy a wonderful chance. We gave him such a beautiful life and it was truly an honor to care for sweet, innocent Mando. My heart is absolutely heavy with grief, but we must keep going. So many others depend on us. Thank you for your continued support of CAPE’s Animal Medical Fund which helps us provide intensive care to animals with severe special needs.

With Appreciation,
Jackie Howard
P.S.: I love the idea of Mando reuniting with Rootie over the rainbow bridge and lying next to him for snuggles!

Why does CAPE rescue sheep?

•Over 500 million sheep are raised for human consumption globally. Many are slaughtered while they are still lambs under a year old.
• Lambs are taken away from mother sheep at a very young age and slaughtered.
• Ewes, female sheep, are impregnated and forced to repeatedly give birth only to have their babies taken away before they are even a year old.
• Rampant abuse has been documented in shearing sheds where sheep are physically abused.

What you can do to help end their suffering?

• You can help by adopting a plant based diet and not consuming sheep or lamb.
• Avoid sheep milk or cheese.
• Avoid purchasing products that contain any type of wool.
• Shearing can be stressful and traumatic for sheep who often suffer injuries that are not treated. There is often little regard for the welfare of the sheep.

• Sheep are intelligent animals with excellent memories.
• Ewes are very caring mothers and form deep bonds with their lambs.
• Sheep have excellent peripheral vision that allows them to see almost 360°.
• Sheep can learn their name and basic commands.
• Sheep are social and like being in a group. ​