Interesting Fact: "donkey" and "burro" are two words that refer to the same animal. "Donkey" is used to refer to the domesticated version, and "burro" is used to refer to smaller donkeys or wild donkeys most commonly found in the West.
​Working closely with the American Wild Horse Preservation Campaign (AWHPC) and the Platero Project, the CAPE Animal Sanctuary is now the forever home to 7 rescued burros and donkeys. Please consider donating to the cost of daily care, high quality hay, supplements, hoof care, and more! ​
Sponsor Papa!
This sweet old man, estimated to be 32 years old, has been through a lot. He once roamed free on public land, but he was rounded up by the Bureau of Land Management and separated from his family. He has spent the past year in a Nevada prison getting little to no socialization.

We can only imagine how much stress and trauma he must’ve experienced. CAPE is proud to partner with American Wild Horse Campaign to bring Papa Antonio to live out his life at the CAPE Animal Sanctuary.  He's been transported to CAPE’s trusted vet for a full health check and she will work on building trust gently. Once he’s ready, he will be introduced to the rescued herd at the CAPE Animal Sanctuary.
​
CAPE and American Wild Horse Campaign are working hard to ensure that this transition is as easy for him as possible. Want to help? Sponsor Papa Antonio today and help cover his vet care and feed costs.

To learn more about BLM round ups and Papa's rescue, check out Episode 8 of Speaking of Animals!
Sponsor Platero! 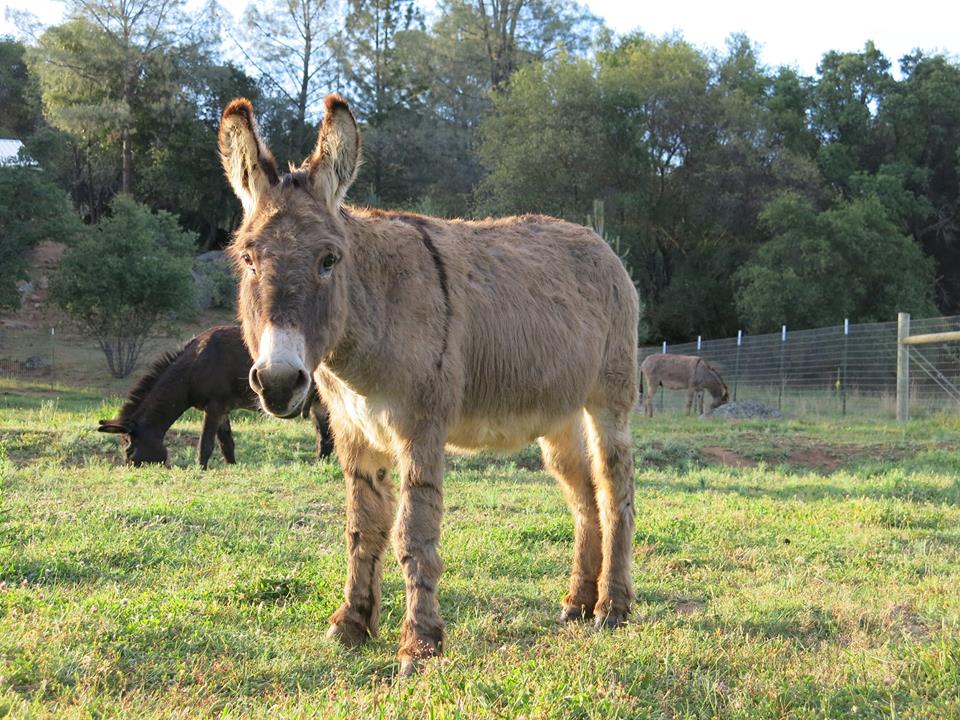 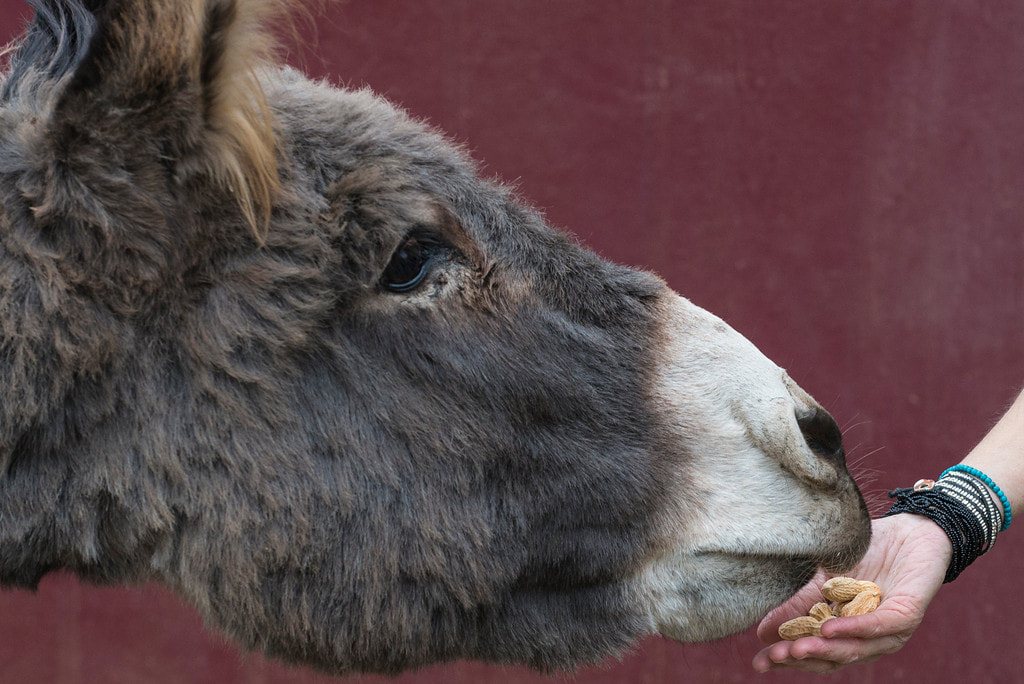 ​For the first years of his life, Platero, who is also known as Pippy, ran free on public land with his family of wild burros. He was rounded up by the BLM in Nevada and was kept in a holding pen for many months. CAPE was contacted by a partner organization who was concerned about his welfare.

He is still a bit shy with humans but has a very close friendship with Celina, Penelope and Billy who share a pasture with him. Burros form very close bonds with each other and are often protective of one another. It’s always a joy to see him enjoying the sunshine, a good roll in the dirt, and to watch him bravely take a peanut from one of his caretakers. Pippy is estimated to be 15 years old.
Celina lived as a wild burro on public land until being rounded up by the Bureau of Land Management (BLM).  She stayed in a holding pen for years before being rescued by CAPE.

​Thanks to the work of CAPE staff and volunteers, Celina now lives her golden years running with the herd of rescued burros at the CAPE Animal Sanctuary. At an approximate age of 37, Celina still retains some of her wildness, but with time, she has grown trusting, playful and sassy with CAPE's caregivers. Celina is especially bonded with Pippy, who was rescued from the same holding pen. She spends her days grazing close to the herd and can be seen playfully nuzzling some of the other rescued burros.
(There are treats in boxes and burros were supervised during play.  Boxes were removed once treats were eaten.)
Sponsor Vita & Sophie! 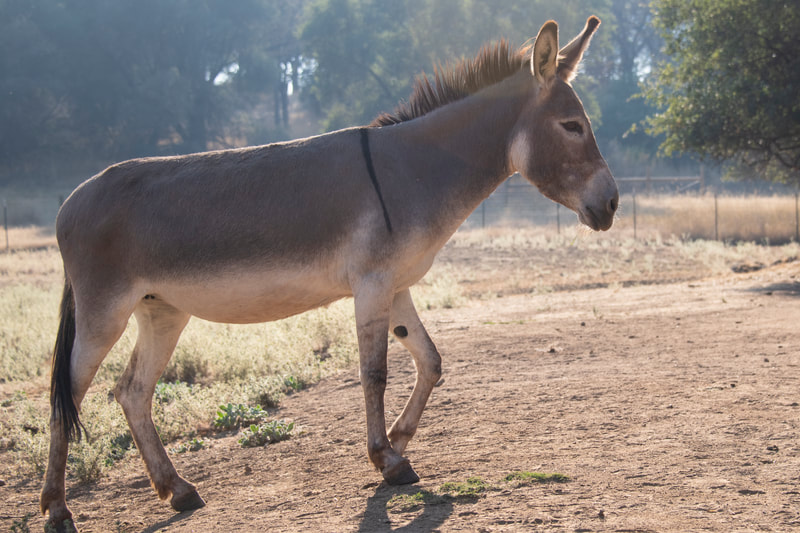 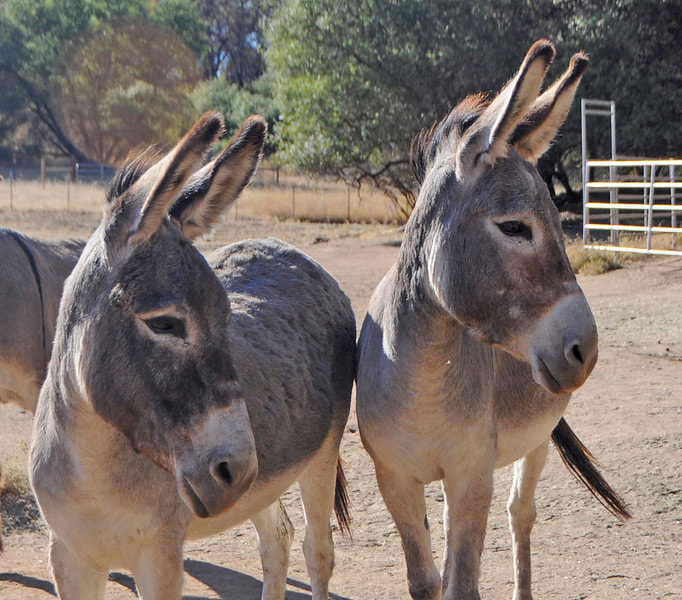 In June of 2012 Sophie and Vita, and over 100 other burros were cruelly captured during the Bureau of Land Management's Cibola-Trigo burro round-up in southwestern Arizona. They were placed into the BLM's holding system, eventually being transported to Wyoming.
​
Despite everything they have been through, Sophie and Vita have stayed together through three years of transports, holding pens and auctions. Sophie and Vita are now safe at the CAPE Animal Sanctuary and they will live out their lives together. They are shy with humans but continue to transform as they spend time with the equine herd. Sophie and Vita are estimated to be 11 years old.

Why does CAPE rescue donkeys and burros? ​

• The Bureau of Land Management (BLM) chases wild horses and burros into holding pens using helicopters in order to use the land for cattle grazing. The burros are separated from their herd and many are injured during the round-ups.
• Wild horses and burros are confined in holding pens where they can linger for years. Many end up going to slaughter if they are not adopted.
• In some parts of the world, donkeys are used as “beasts of burden” living lives of abusive service.

What can you do to help end their suffering?

• You can help by adopting a plant-based diet. This will reduce the cattle industry’s impact on the public land that is home to wild horses and burros.
• Be aware of legislation that affects wild horses and burros. Voice your opinions to your legislators at every opportunity.
• An informative resource is The American Wild Horse Campaign, www.americanwildhorsecampaign.org.
• Avoid any industries that use donkeys as “beasts of burden”.